Tea-towel hand-stitched collage, made from discarded newspapers and books, and my nana’s old thread.

All of my work is individually numbered, this is 852.

It is a one-off piece, never to be reproduced in print form. This would go against my grain. I don’t add stuff to the world, but use what is already here.

Strictly not to be reproduced online without giving credit to the people below.

Prince George on his first day at school. Photograph by Richard Pohle. Cut from the London Evening Standard, 7.9.17.

With the legs and right arm of his great grandmother, then Princess Elizabeth, with her dog, Jane. Studio Lisa, 1936. Studio Lisa was founded by Jimmie and Lisa Sheridan, grandparents of Jenny Hanley, Magpie presenter.

His left arm belongs to his father, Prince William, cut from a book (Faces Of The Century, NPG 1999) which I took from a bin. It was part of a painting by Nicky Philipps, 2009.

The cat, at his feet, was part of a knackered book (The Nicholas Thomas Story Book by Kitty Styles, illustrations by Mary Kendal Lee, 1948).

His hat belonged to King Henry VIII, c1520. Unknown artist. NPG. It came from the same book as his left arm.

Prince Charles, grandfather of Boy 1. He is wearing his favourite ski suit, pale blue with a pattern of dancing sailors and battleships. 1950. Photographer uncredited.

His crown was taken from his mother’s coronation portrait by Cecil Beaton, 1953 (same bin-book as Boy 1’s left arm).

The collection tin was held outside Worthing Town Hall in 1951, a year after the photo of Charles was taken, during a royal visit. The tin shaker and photographer uncredited. His shoulder jewellery was taken from the same portrait as Boy 1’s hat.

He is standing on the Whitechapel Fatberg. Cut from the London Evening Standard, 14.9.17. Thank you to Sam Fishwick for telling me the photographer is Mark Writtle and the red-gloved hand belongs to Ronnie Floodwater. 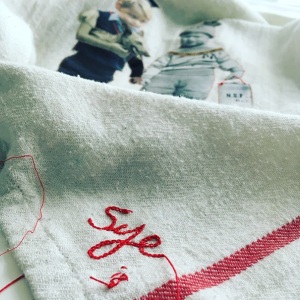 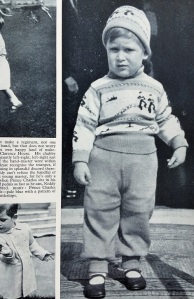 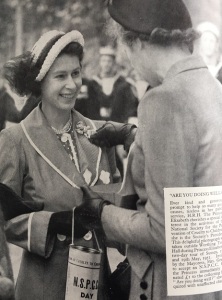 © Alison Sye, 2018. All images of my work are my copyright, and as such will never be reproduced in hard-print format (it goes completely against the grain of my work, I don’t add new stuff to the world, but use what is already here), or in digital format without permission. Credit must always be given to myself and the photographers involved.