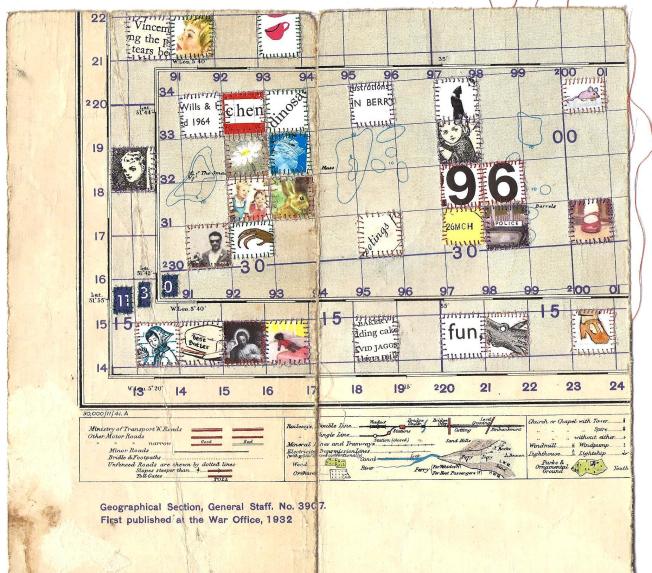 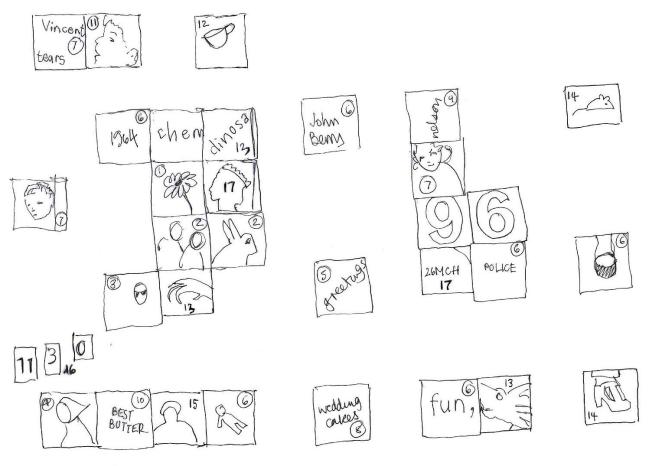 11. Taken from ‘Talkabout Starting School’ by Margaret West and Ethel Wingfield. Illustrated by Harry Wingfield. Published by Ladybird in 1977.

12. Taken from ‘This Is The House Where Jack Lives’ by Joan Heilbroner. Pictures by Aliki. First published by Windmill Press in 1962, but this edition published in 1977.

13. These are the tiny scraps, which I never throw away, from some work I did last year.

9. Nelson on top of his column. Taken from an advert for ‘Associated British and Irish Railways Incorporated’, published in The National Geographic Magazine, February 1939. People were reading this particular copy of National Geographic as the Bismark was launched, and as the first Anderson Shelter was erected in an Islington garden.

10. ‘Best Butter’ is a nod to my Uncle David, who died a few years back. It would’ve been his birthday this week. He never said the word ‘butter’ without putting the word ‘best’ in front of it. Mostly he ate margarine on his bread, except on special occasions when he had ‘best butter’. The picture came from ‘The Nicholas Thomas Story Book’ by Kitty Styles, illustrated by Mary Kendal Lee. It was published by Sampson Low, Marston and Company, Limited, London 1950s.

’96’ is a tribute to the people who lost their lives in the Hillsborough Disaster. More than 96.

‘1,130’ is a tribute to the Dhaka factory workers, who lost their lives when a garment factory collapsed last year. They were making cheap clothes for the Western market. The building had been declared unsafe two days earlier, but quotas needed to be met.

I recorded numbers 1-5 here, and am now going to try to do some more.

6. 3a Things We Like, Ladybird Key Words Reading Scheme. Written by W. Murray and illustrated by John Berry, seen in my piece. The book was published in the 1960s, and was inscribed ‘Karen Mitchell’.

7. The Big Book of Saints, retold by Christine Chaundler. Published by A.R. Mowray and Co. Limited. First published in 1952, this edition in 1964. When I was a student, I had a Saturday Job working at Mowbray’s Bookshop. It was near Broadcasting House. I was lucky enough to be living near London Bridge at the time, so I used to walk there. After I left, the company was taken over by Dillon’s Books. Then Dillon’s disappeared, too. I went looking for the building recently, and found its latest incarnation to be a bra shop. That’s a picture of Saint Vincent (left), by the way. The one on the right is a child from the story. Saint Vincent, as well as other stuff, was sold as a slave and started children’s homes.

8. This square was taken from a  leaflet cataloging the wedding presents given to ‘Her Royal Highness The Princess Anne and Captain Mark Phillips’, on 14th November, 1973. It was published to accompany a display of said presents at St. James’s Palace. I bought it for the bargain price of 50p from a local charity shop, and it kept me entertained for ages. Everything was listed and displayed, no matter how ridiculous. Anonymous gave ‘toilet preparations’ (what?), Mrs F. Jenkins gave two pairs of nylon stockings, Mrs M.E. Coe gave picture postcards of San Diego, Mrs N. Cleary gave talcum powder, The Aga Khan gave a Telex cassette player, Mr and Mrs A. Hicks gave a milking stool. I could go on, as every single present is a gem, but there are 1,524 listings.

2. Lindy and Bill, and a rabbit/hare from High On A Hill by Mabel O’Donnell and Rona Munro. Illustrations by Florence and Margaret Hoopes, and Christopher Sanders. Published by James Nisbet and Co., this edition 1966.

5. A scrap from that Albuquerque postcard book I bought on Ebay during my Breaking Bad obsession, still ongoing, by the way. Incidentally, the red square above the daisy is also a little nod to Breaking Bad.